Nationalism in the Democratic Republic of Congo

According to Zakaria, nationalism is a result of a peoples’ increased awareness of being part of a nation-state. However, it is also a paradoxical phenomenon of globalization. As Zakaria explains it through his interaction with a Chinese businessman in Shanghai, as a nation-state becomes more globalized and economically successful, a need for more economic success breeds a sense of nationalism. As the global stage becomes more open, nations become more self-aware. The U.S views this new force of nature with a perplexity that is seen as radical and not at all akin patriotism. In expressing his concerns over this new nationalist campaign, Zakaria also sees sub-nationalist campaigns in countries such as India and China that are composed of groups that may go toe to toe in their efforts for national dominance. Zakaria sees this as a threat to legitimacy of the nation-state as well as a threat to an overall international effort to globalize the world.

In the Democratic Republic of Congo, the establishment of a nation-state had been hard-fought during and after its independence from its Belgian colonial rulers in 1960. The nationalist timeline in the formerly Belgian Congo first began to show its face in an increasingly modernized global society with the establishment of the country’s independence. According to an article published by the International Affairs and Global Strategy, the educational elites, or the evolues, began to express discontent out of the Belgian administration’s policy of exclusion of the Congolese from important high ranking  leadership positions. During this period the elites became influenced by missionary work as well as World War II, which had rocked the world stage. These evolues, then began to form coalitions, such as the Association of Indigenous Personnel in Belgium Congo and in Rwanda-Burundi and the National Union of Congolese Social Interests. In my criticism of these nationalist groups, I have to wonder if the Congo was embracing its nationalist identity or a European made construct of its national identity.

There were also political organizations that found it basis upon ethnic and regional lines, such as the “Association Culturelle des Bakongo”, which was a challenger to Belgian colonial rule in its claim to ethno-religious representation of the ethnic Bakongo people in the Democratic Republic of Congo. It is through these political groups that one could see the different layers of nationalism that were beginning to emerge in the Belgian Congo. This is exactly what Zakaria was referring to when writing about sub-nationalism, and has since led to corruption and violence that penetrates the current Congolese government through the warring groups that were borne out of independence and persist today.

In 1961 Patrice Lumumba the first Prime Minister of this young nation-state stated “The objective is to unite and organize the Congolese masses in the struggle for the amelioration of their lot, the liquidation of colonial regime and the exploitation of man by man. It is high time that these Congolese people proved to the world that they are cognizant of the realities of the “autonomy-gift” which the government is preparing and promising.”

It appears that to outside observers, the Congolese independence effort and the Congolese nationalist effort are one in the same.

In Steger’s commentary on the rise of the nation-state, he introduces a group called the hyperglobalizers who sees territorial divisions as antithetical to the effort of globalization. According to a report from the Africa Center for Strategic Studies, it is outside of the capital city of Kinshasa today, that the Democratic Republic of Congo has become territorial divided by armed militia groups that claim the territory as their own and autonomous from the central government. There are groups that impose their armed dominance over Kasai, Katanga, Eastern DRC, and Mai Mai Militias that are seen as local franchises. The motive behind many of these militias is the decision by the current president of the DRC, Joseph Kabila, to remain in office despite overstaying his constitutional term in office.All of these groups are sub-nationalist in Zakaria’s eyes, and antithetical to the idea of globalization in the eyes of hyperglobalizers introduced by Steger.

Map of the Militias that Divide the Region 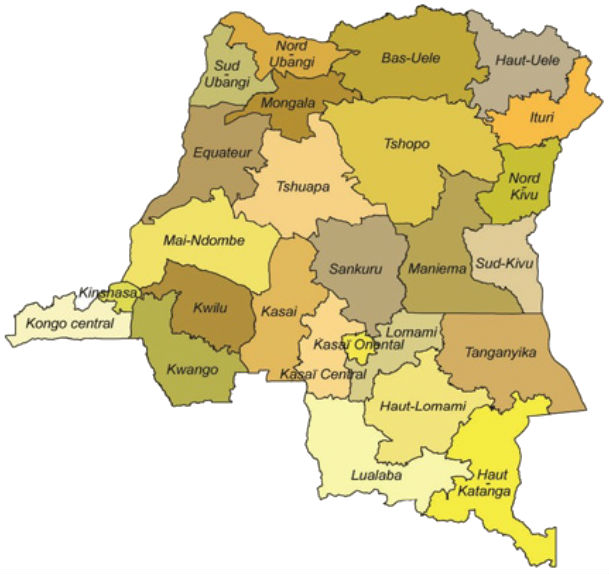 Inequality in the Democratic Republic of Congo

In terms of inequality, it has already been mentioned in the previous blog post that the unofficial GINI coefficient in the Democratic Republic of Congo is 42.10.  However, it is considered among the most unequal countries in the world. According to the Global Post, income inequality in the Democratic Republic is best exemplified by the Cite du Pecheur (City of the Fisherman) and La Cite de Fueve (City of the River). On one side resides fishermen in canoes and “the marshy canals of a crowded fishing village”. On the other side, the British hedge fund, Hawkwood Properties is “developing 1600 acres of water to become a tranquil residential haven complete with swimming pools, schools, grocery stores and a sports complex”. As a result of the development of the City of the River, hundreds of families have been displaced in the new city’s expense, leading to a local discontent. Robert Choudury who heads this new initiative, claims that each family was paid a generous $25,000, however the fishermen claim that these massive paychecks go to the landlords who take the money and essentially leave these families with nothing. One such victim is Zadulo Lwango, who has resorted to living in the streets after the soldiers forced him out of his home in 2009. Because Chodury is backed by government officials that make the laws on landowning, the fishing community is essentially left with nothing, and the issue remains unaddressed.