Slavery in the DRC 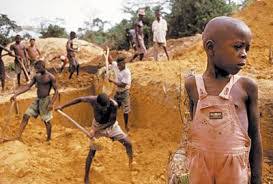 According to the U.S. Departement of State, the Democratic Republic of Congo is a center for forced labor and human trafficking. Sex trafficking is primarily carried out by armed groups as well as radical elements of the Congolese government.  According to the Department of State, “a significant number of men and boys working as unlicensed Congolese artisanal miners are reported to be exploited in situations of debt bondage by businesspeople and supply dealers”. Many of these young men and boys are forced into labor and are unable to get out due to paying off debts that are virtually impossible to get out of.  As for women and girls, some are unwillingly prostituted into brothels or camps, as well as to regions outside of the Democratic Republic of Congo, such as Angola, South Africa, South Sudan, and the Republic of Congo. Many of these victims to human and sex trafficking are antecedently lured by the promise of employment as well as other financial opportunities.

It is suspected, though not confirmed, that orphan children that work and beg in the streets are highly vulnerable to sex trafficking. There are some elements of hereditary slavery, as observed by some NGOs, who claim that in the Equateur Province, families of the Batwa, a pymie ethnic group, are enslaved by non-Batwa families that are forced to carry out certain duties in areas such as agriculture. According to the United Nations, men, women, and children, are abducted and forcibly recruited by armed militias such as the Lords Resistance Army, the Coalition of Patriots in the Congolese Resistance, the Patriotic Force of Resistance in Ituri/Popular Front for Justice in Congo, the Allied Democratic Forces/National Army for Liberation in Uganda. Victims are forced to join their movements, serve as bodyguards, laborers, sex slaves, and domestic servants, and carry out heinous crimes. Human trafficking and sex slavery is a serious and heinous crime in the Democrative Republic of Congo that continues to be perpetrated by multiple acting groups.

According to the article Born Free,  sex trafficking is a “big business” that is an “enormous development challenge”, which generates $150 billion and affects tens of millions of people. Efforts have been made to put a stop to the inhumane industry, such as the Millenium Development Goals. Recently, however, a  more concerted one has been introduced through the Sustainable Development Goals (SDGs), which seeks to directly address what President Obama called “one of the great human rights causes of our time”. Under their goal proposal number five, which calls for the empowerment of women and girls and to put a stop to their exploitation, it also includes a call for the stop to their trafficking. Goal proposal number eight calls for the promotion of “sustained, inclusive, and sustainable economic growth, full and productive employment and decent work for all”, but it also calls for the end of trafficking of children by 2025. Additionally, under Goal 16, there is a call for the general halting of the trafficking of children. Some things that could be done to combat human trafficking include “‘provid[ing] legal identity for all including birth registration,’ promoting ‘sustainable tourism,’ and ‘sustainable transport systems . . . with special attention to the needs of those in vulnerable situations, women, children, persons with disabilities… .’” These are all indirect elements that can play a key role in preventing human trafficking, There are also efforts being made to stop the flow of arms and other areas of organized crime, which have serious connections to human trafficking.